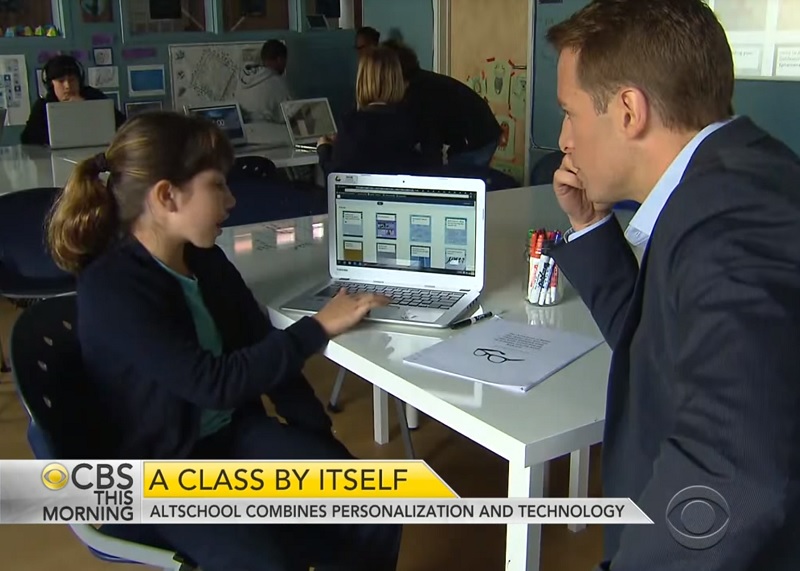 AltSchool is a highly hyped $21,000 per year K-8 school in Silicon Valley. As a teacher there, Paul France has been profiled in some of the nation’s leading outlets, including The New Yorker and Wired. You can see a brief overview of the school model in the 2015 CBS video below.

Yet after several years as the poster boy for an experimental, highly tech-centric model of schooling that is driving billions of dollars in grant-making and public school purchasing decisions, France decided to quit. Last summer he moved back to Chicago to teach in a 100-year-old traditional private school. Why?

“The vision was a curriculum that catered to every child so they’re learning at their level all the time,” France told The Atlantic for an article out this November. “But when every child is working on something different, you’re taking away the most human component in the learning process, which is social interaction—learning from one another and collaborating to solve problems. They’re developing a relationship with their tablet, but not with each other” (emphasis added).

Regular readers and friends of the school will recall that we take seriously education philosopher Charlotte Mason’s dictum that “Education is the science of relations.” An education aims to develop as many relationships as possible between a child and everything in the world, most importantly with God but of course also with his creation and the family and country God placed them in.

Given this, what are children learning when they develop a relationship primarily with and through their technology, not primarily with their fellow students, teacher, with God, family, and creation? One could answer: addiction. That is, in fact, what many technology products are designed to produce: addictive behaviors. This creates more revenue for the technology companies, and the companies they connect people to through ads.

“For France, the turning point came one morning when he looked around a kindergarten classroom, ‘and the kids were staring at their tablets, engrossed by them,'” The Atlantic article continues. “‘And I’m thinking to myself, ‘They could be building with blocks, they could be doing a number of different things that are more meaningful that also build social and emotional skills but they’re choosing not to. Why? Because the tool is so addictive, that’s all they want to do.’”

France says he now uses technology as a tool, to support the broader and larger goals that a quality classroom ought to have: “The question always should be: Is the tech in my classroom going to preserve or enhance human connection?”

AltSchool was created to meet some real deficits in conventional schooling, such as overstandardization, moving children along by age instead of capability, and a lack of personal responsibility among students and families for their own education. With parents who can cough up $21,000 a year for tuition, these kids are certainly going to turn out fine, at least in material terms. It’s unfortunate, however, that with this much money and media attention the actual product isn’t of a worthier quality.

It’s common today to get excited about big spending on fancy gadgets, especially when one doesn’t have a good basis for judging school quality. It’s unfortunate that these tech titans didn’t themselves have a better-rounded education that helped them understand that pure mechanical innovation cannot solve human problems like education, which also involve the heart and soul. This is an age-old human concern illuminated by a deep understanding of history, philosophy, literature, and theology. That’s why we prioritize these kinds of pursuits far above gadgets that are here today, gone tomorrow.

But the good, the true, and the beautiful: that will endure for all eternity.