Redeemer Classical School is the only Lutheran Classical School in Indiana. We provide an education in the classical liberal arts and sciences informed by the Christian faith. We offer classes for elementary and middle school students that will enliven their souls and enlighten their minds, not just prepare them for a career or give them a meaningless diploma.

Our long-term goals include forming a network that will cultivate new classical schools across Fort Wayne and beyond, establishing a center to train teachers from all kinds of schools in classical methods, offering stimulating adult classes in everything from the American founding to classic literature, establishing a learning and exploring haven for preschoolers that integrates rather than displaces their parents, and working with homeschool families to meet their needs. We are in constant contact with other classical schools, school boards, and organizations, both new and established, to share ideas and get advice. These include the Lutheran Schools Partnership here in Fort Wayne, the Consortium for Classical Lutheran Education, Memoria Press, Hillsdale College, and Hillsdale’s Barney Charter Schools Initiative.

Why Classical Education Is Different

Classical education is not just another style of schooling. It’s something completely different, starting with what we call “first principles.” That means that our distinctively Christian, historic philosophy holds that certain things are true about human nature, and those truths must shape how we educate children.

One of the first of these is that we don’t assume children begin life perfect and society corrupts them. This is an anti-Christian idea that pervades most schools, even Christian schools, even if they don’t say so explicitly, through methods and slogans such as “child-led instruction” and “follow your passion.” Of course, Christianity teaches that humans are by nature sinful and unclean, which is why we need Christ’s redemption. So we teach children to “take every thought captive to obey Christ,” through a variety of methods including robust critical thinking, knowledge of biblical and natural truth, and habits of character such as self-discipline and repentance.

We also don’t believe teachers should be passive “guides on the side,” facilitators who set children loose upon the world with little guidance, to “construct their own knowledge.” This is relativism, which is ultimately anti-Christian. Instead, we view teachers as authorities with important, exciting, objective truths about creation to impart to the young ones in their care. This means children need explicit, direct instruction, and that we don’t assume all ideas are equally valid (although we’re willing to entertain all ideas openly during discussions in our communal search for truth).

The goal of education is not to build a child’s self-esteem, but to help parents cultivate his character and shape his loves, the fruit of which is ultimately enduring joy, something far greater than happiness. The goal of an education worth pursuing is virtue: moral, intellectual, and physical. We believe Western civilization and Christendom has over centuries discovered and transmitted truths about the human condition that we owe to our forefathers, children, and fellow citizens to continue refining and passing down.

Why the classical liberal arts?

Two reasons: intelligence and character. The classical liberal arts is not just a course of study, but an application of the human soul to eternal truths with an eye towards inculcating moral and intellectual virtue. The liberal arts prepare a person not just for a job or specific skills that may change with the times, but to gather, retain, organize, and judge information, and translate it into virtuous action.

Many Christian schools and homeschooling methods emphasize morality or intellectual rigor, but the liberal arts rightly joins these in an engaged, time-tested curriculum and habits of mind. The liberal arts aim to inculcate in children a love for goodness, truth, and beauty that will continually lead them towards eternity. They train children to learn what is true, why, and to explain and defend it publicly.

Most liberal arts enthusiasts direct newbies to Dorothy Sayers’ essay outlining the structure of classical education, “The Lost Tools of Learning.” Since the revival of interest in the classical  method began in approximately the 1980s with attention to this essay and others, classical educators have developed and recovered methods and ideas that augment and refine Sayers’ work. In that pursuit, Redeemer Classical aims to recover a full understanding of true education, incorporating the current, improved state of this education renaissance, which transcends models such as those created by Douglas Wilson’s Logos School, Core Knowledge, and Classical Conversations.

Meet Our School Board 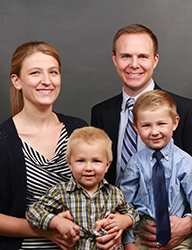 Rev. Daniel Burfiend is the husband of Roseli, father of five children, and pastor of New Hope Lutheran Church in Ossian, Indiana. He and Rosi are graduates of Hillsdale College, one of the country’s leading liberal arts institutions and a national pioneer in establishing and advising K-12 classical schools and developing classically oriented teachers.

At Hillsdale, where he majored in history, Burfiend won a campuswide speech competition for three of his four undergraduate years and was on the college debate team. Burfiend worked for the college after graduation in institutional advancement before heading to Concordia Theological Seminary here in Fort Wayne for both his pastoral graduate degree and an academic graduate degree in theology. Burfiend also advises the board of Wittenburg Academy, an online classical school.

Aaron Schultz was born and raised in California, graduated from the University of Nebraska with a degree in Education, and took his first teaching job at a Lutheran school in New Orleans.  In New Orleans he met and married the lovely Katie Sovik.  They moved to Alexandria, Virginia, where Aaron taught at Immanuel Lutheran Classical.  He taught for ten years in Lutheran schools (five years at Immanuel Classical) before enrolling in seminary.  Currently serving as vicar at Redeemer, he has one more year of seminary after this year before being ordained.  Aaron and Katie have four boys: Canon (8), Benjamin (5), Samuel (3), and Augustine (1).

Nathaniel Pullmann is a husband and the father of six children. He and his wife are both graduates of the finest liberal arts college in the country, Hillsdale College. He has spent nearly a decade developing classical, Christian education options in Fort Wayne. In 2012, he founded the first Classical Conversations group in the area, starting a movement that has grown into half a dozen classical homeschool communities in the area, educating hundreds of students.

In 2017, he founded and opened Redeemer Classical School, the first classical Christian school in the Fort Wayne area. He is the headmaster of the school and a teacher there. Under his leadership, the school has grown every year since opening, quadrupling the number of students and faculty. He has also consulted with several other schools that are in the process of making their education more classical and with several groups that are trying to start new classical, Christian schools.

Now I can finally say it. This move to Fort Wayne was absolutely the best decision we could have made. The kids are so happy. The school is exactly what they needed. Tuesday marked the first day of school. The day we’ve been working toward for over a year. Until this week, we couldn’t say … END_OF_DOCUMENT_TOKEN_TO_BE_REPLACED

It took only a few days to see our boys move from boredom, asking if they had to go to school today,to excited to be up and ready each morning, ready to engage, ready to learn.  What they have been given is love of learning. What drew us to Redeemer was the level of ability … END_OF_DOCUMENT_TOKEN_TO_BE_REPLACED

My son has loved being a part of Redeemer Classical School for the past three years. We have watched his love of learning grow as he has been encouraged and challenged by his teachers and classmates. He has gained confidence in his own identity and abilities. The school holds to a high academic and moral … END_OF_DOCUMENT_TOKEN_TO_BE_REPLACED