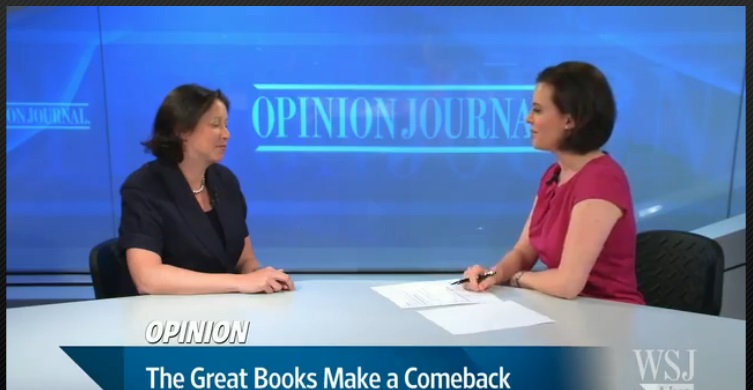 James Piereson and Naomi Schaefer Riley recently wrote on Minding the Campus about the resurgence in great books programs, both at the college level and in K-12:

When Thomas and Lorraine Pangle, married professors of government at the University of Texas at Austin, launched a great books program for freshman this year, they expected a demand, but they weren’t prepared for just how strong it would be. With 80 slots available, the scholars program of the Thomas Jefferson Center for the Study of Core Texts and Ideas received 440 applications–not only from the College of the Liberal Arts but also from the College of Natural Sciences, the engineering school, and the business school.

The UT experience is not unique. Christopher Nelson, president of St. John’s College (a great books school in Annapolis, Md.), says that his school’s applications have been stronger in the past four years than at any time since he took charge more than two decades ago. The Great Hearts Academy charter school network in Arizona now has nineteen schools and is planning more. The Classical Latin School Association, just created last year, is working with twenty schools directly and hundreds more are using parts of its curriculum. A Latin textbook for elementary grades used at many of these schools has sold 150,000 copies.

In a tight economy with so many students (and their parents) increasingly focused on career preparation, growing interest in studying Plato, Aquinas, and Locke comes as a surprise. But the vocational impulses in public schooling and the rise in homeschooling may be driving people back to the great books, says Ken Calvert, the headmaster of Hillsdale Academy, a classical elementary and high school in Michigan whose curriculum has been adopted by schools around the country. At public schools, “the emphasis these days is on the illiberal.” Education is narrowing students’ intellectual vision. Curricula like the Common Core “see human beings as drones,” and students “never tackle the big questions about life and the nature of the universe.”

It took only a few days to see our boys move from boredom, asking if they had to go to school today,to excited to be up and ready each morning, ready to engage, ready to learn.  What they have been given is love of learning. What drew us to Redeemer was the level of ability … END_OF_DOCUMENT_TOKEN_TO_BE_REPLACED

My son has loved being a part of Redeemer Classical School for the past three years. We have watched his love of learning grow as he has been encouraged and challenged by his teachers and classmates. He has gained confidence in his own identity and abilities. The school holds to a high academic and moral … END_OF_DOCUMENT_TOKEN_TO_BE_REPLACED