The journal Education Next is highlighting two recent studies by Jay P. Greene and colleagues that find a measurable improvement in kids’ empathy for others, academic knowledge, and a greater taste for culture after the children visited art museums or watched classic live theater.

The art museum authors comment on the marked decline in children’s exposure to quality cultural experiences given the drastic increase in testing anxiety thanks to state and federal mandates on public and private schools.

Some schools believe that student time would be better spent in the classroom preparing for the exams. When schools do organize field trips, they are increasingly choosing to take students on trips to reward them for working hard to improve their test scores rather than to provide cultural enrichment. Schools take students to amusement parks, sporting events, and movie theaters instead of to museums and historical sites. This shift from “enrichment” to “reward” field trips is reflected in a generational change among teachers about the purposes of these outings. In a 2012‒13 survey we conducted of nearly 500 Arkansas teachers, those who had been teaching for at least 15 years were significantly more likely to believe that the primary purpose of a field trip is to provide a learning opportunity, while more junior teachers were more likely to see the primary purpose as “enjoyment.”

The authors of the theater field trips study made similar comments:

As schools narrow their focus on improving performance on math and reading standardized tests, they have greater difficulty justifying taking students out of the classroom for experiences that are not related to improving those test scores. Schools are either attending fewer field trips or shifting toward field trips to places they know students already enjoy. When testing is over, schools are often inclined to take students on “reward” field trips to places like amusement parks, bowling alleys, and movie theaters.

This study randomly assigned groups of children to see either “Hamlet” or “A Christmas Carol” (which, by the way, are both part of Redeemer Classical’s curriculum). It was the first high-quality study ever conducted to attempt to gauge some effects of exposing children to live classic theater. The graph below provides a simple summary of the results. 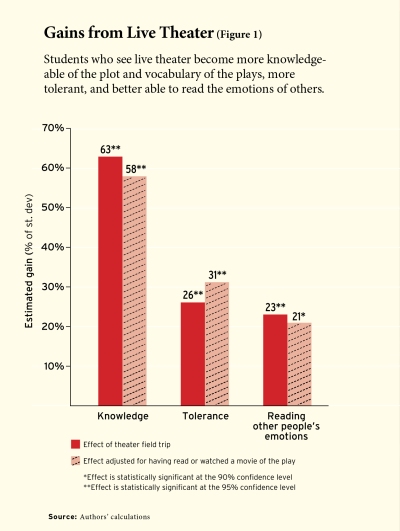 Here is a similar graph from the art museum study:

Now I can finally say it. This move to Fort Wayne was absolutely the best decision we could have made. The kids are so happy. The school is exactly what they needed. Tuesday marked the first day of school. The day we’ve been working toward for over a year. Until this week, we couldn’t say … END_OF_DOCUMENT_TOKEN_TO_BE_REPLACED

It took only a few days to see our boys move from boredom, asking if they had to go to school today,to excited to be up and ready each morning, ready to engage, ready to learn.  What they have been given is love of learning. What drew us to Redeemer was the level of ability … END_OF_DOCUMENT_TOKEN_TO_BE_REPLACED

My son has loved being a part of Redeemer Classical School for the past three years. We have watched his love of learning grow as he has been encouraged and challenged by his teachers and classmates. He has gained confidence in his own identity and abilities. The school holds to a high academic and moral … END_OF_DOCUMENT_TOKEN_TO_BE_REPLACED