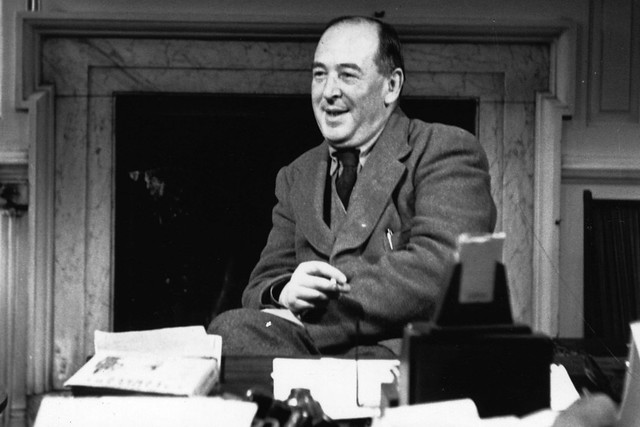 This past spring semester, we hosted biweekly evening discussions based on lectures from Hillsdale College’s online Shakespeare course, paired with delicious wine selections from Wine Time. Thanks to the positive reaction, we’ll do it again this fall, based on the results of a recent survey. As before, the discussions will be free and open to all.

Survey takers selected “Introduction to C.S. Lewis” class as their first choice among the many potential classes, and said biweekly on Monday nights was by far the best timing. So that’s what we’ll do!

The first Drink ‘n Think in this C.S. Lewis series will be September 9, 2019, at 6:30 p.m. at the school. It will continue biweekly for nine total weeks, ending on December 30. Hillsdale lists the nine lectures as follows:

Wine pairings and beer on tap will be available for $5/glass.

To receive email reminders and updates (only a few, don’t worry) about these grownup evenings out, and to make sure we supply enough adult beverages for those interested, please sign up using the form below, or at this link. If enough parents are interested, we can also arrange onsite childcare during the discussion, which usually concludes around 8 p.m. Just indicate that on the signup.

Now I can finally say it. This move to Fort Wayne was absolutely the best decision we could have made. The kids are so happy. The school is exactly what they needed. Tuesday marked the first day of school. The day we’ve been working toward for over a year. Until this week, we couldn’t say … END_OF_DOCUMENT_TOKEN_TO_BE_REPLACED

It took only a few days to see our boys move from boredom, asking if they had to go to school today,to excited to be up and ready each morning, ready to engage, ready to learn.  What they have been given is love of learning. What drew us to Redeemer was the level of ability … END_OF_DOCUMENT_TOKEN_TO_BE_REPLACED

My son has loved being a part of Redeemer Classical School for the past three years. We have watched his love of learning grow as he has been encouraged and challenged by his teachers and classmates. He has gained confidence in his own identity and abilities. The school holds to a high academic and moral … END_OF_DOCUMENT_TOKEN_TO_BE_REPLACED